We leave serene Bevagna and drive across the plain. Farms, factories, housing estates and the rest of the essential marks of the twenty first century rapidly return us from lunchtime reveries. Bypassing Foligno and, still on the ancient path of the Via Flaminia, we drive to Spello where there is a wonderful unexpected surprise, one of the great works of Renaissance painting. Spello clambers up a ridge overlooking over the Umbrian plain towards Assisi. Entering the village through the Roman Porta we follow the street uphill to the Collegiate church of Santa Maria Maggiore. Here there is one of the wonders of Renaissance art, Pinturicchio’s (This is a nickname meaning the little painter.) frescoes in the Baglioni Chapel. The floor is laid with majolica tiles from Deruta, the famed nearby pottery town. There are reproductions of two of these tiles featuring two blue painted, lively cheeky cherubs on our balcony wall. The frescoes were commissioned by Bishop Troilo Baglioni, a member of the family who ruled the area between Perugia and Spello. Like many public works of art of the time there is a political message behind the religious subjects of these Pinturicchio frescoes. It’s to remind the viewer that the bloody family turmoil in the Baglioni family who ruled Perugia and this part of Umbria was now over and the those that caused the bloodshed had been vanquished and punished, leaving the branch of the Baglioni to which Troilo belonged the victors. In June 1500 disharmony and jealousy in the Baglioni family lead to extreme violence during the wedding of Astorre Baglioni and Lavinia Orsini Colonna in Perugia. Driven by ambition to have control of Perugia himself, a relative, Carl Oddo and others including Griffonetto, the grandson of Braccio Baglioni Lord of Perugia plotted to take over the Baglioni domains. In a bloody fury during the wedding celebrations they and their supporters slaughtered Astrorre and Lavinia and many other leading members of the Baglioni. Having hacked them to death in a murderous frenzy the plotters threw bodies out windows and dragged them though the city streets leaving a red trail of gore. This massacre has become known as known as the red wedding. But it was murder and mayhem for nothing. Gian Paolo Baglioni a member of the ruling branch of the family who had escaped the massacre captured Griffonetto and had him executed. To reinforce the message that Braccio Baglioni was again firmly in charge and that peace and normality had been restored in the background of one frescoes there is a grim execution taking place, a pointed reference to the fate of Giffonetto and his fellow plotters. The glowing frescoes were painted between 1500 and 1501 in the wake of the red wedding massacre and are in three parts recounting stories of the early life of Christ, the Annunciation, the Adoration of the Shepherds and the Dispute with the Doctors. The paintings have been restored to give the original colours a renewed luminous vibrancy, a brilliant spectrum. Umbrian peasant characters people the frescoes and they are detailed with scenes of everyday life. Each fresco is set in the familiarity of an Umbrian landscape. The world Pinturicchio has represented for us here is a microcosm of grace, harmony, peace and elegant gestures. There are fascinating details in each fresco, joyful recreations of life, real and imagined. I am especially drawn to Pinturicchio’s vivid depiction in the Annunciation fresco of a richly robed Archangel Gabriel kneeling in devotion before a serene Virgin Mary. He is, as you might expect of an archangel, impossibly handsome and has the most delicately painted pair of peacock wings. A landscape of Spello painted in the background give the fanciful scene an air of reality. After leaving these scenes of religious legend more worldly concerns need attending to. We can’t resist buying some particularly succulent looking porchetta for dinner later and a bottle of Rosso di Spello at Enoteca Properzio. “This is the best Merlot in Europe signore.” cajoles the vinaio. Priced at seven euros I suspect there may be some others that are just slightly better. I may be a tourist but I don’t think I’m a naive one. I know better and buy the Rosso di Spello. The walk up the street to the top of the village follows the ridge to a Roman gate and belvedere where we take in the view along the Valle Umbra as far as Assisi. Monte Subiaso dominates the landscape. 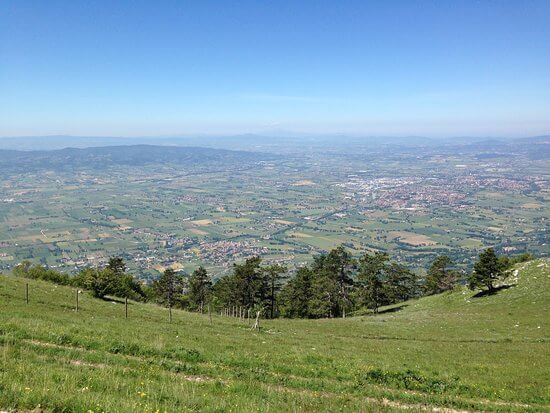 Monte Subiaso is a 1300m mountain that lords over the landscape between Spello and Assisi. The road circles the mountain around the eastern slopes to Assisi but we leave that for another day that does not eventuate. Sandra says why go? It’s an enormous display of religion for pilgrims and the gullible gawkers. And crowded. The road winds through forest and we take a break at tiny circular Armenzano which is so small that it takes 5 minutes of leisurely sauntering to circumnavigate. We make a wrong turn down a steep winding road until we realise we have misread a sign, an easy thing to do but the views across the Topino valley make this a worthwhile detour. Monte Subasio is part of Apennines chain of mountains that form the central spine of Italy. We pass through cool, dark forests of chestnut, hornbeam, maple, beech and ilex. The narrow road winds and doubles back on itself through hairpin bends. To the right there are grey brown patches of cleared land planted to olives. Hills fold and roll away towards the main ridge of the Apennines. Tree branches arch overhead forming a cool tunnel, sunlight filters through dappled leaves illuminating the various colors, grey green, blue green, light yellow. Each type with its own shape and texture. The road makes a slow steady descent to Assisi which we deftly bypass. We twist up a narrow road though olive groves to reach Bettona, round the belt of walls that were first built in Etruscan times and still enclose the village, through a gateway with huge wooden doors and into the piazza. Unwelcoming signs let us know that only residents’ cars can be parked here. That’s fair but fortunately our car has PG registration, local plates for the residents of the Provincia di Perugia so who will know we are not supposed to leave it here. We take a leisurely drink at a bar beneath the palazzo that houses the Pinacoteca Comunale. We turn our chairs to look out onto Piazza Camillo Benso Conte di Cavour. The supremely politically adept Cavour was Prime Minister of Piedmonte and one of the main architects of the establishment of the Kingdom of Italy in 1861. People are beginning to emerge for a brief passeggiata and an aperitivo. It is impossible to stroll for any distance in a village as tiny as this, but it can be made to seem longer with an almost shuffling, slow and measured, hands behind your back manner of walking. A woman, perhaps in her seventies, expensively dressed and wearing large sunglasses enters the piazza. Her whole look is dated but her outfit is elegant and well-tailored. She is making the absolute best of what she has. The quality of her clothes and aristocratic demeanour her set her apart. Bettona was once a possession of the Baglioni family so it’s nice to imagine she is one of their descendants. She is the star of the piazza, holding court for a captive audience and delivering them a lengthy monologue. As we sip our aperitivi we absorb the restful atmosphere of the piazza observing the relaxed, slow village life. At dusk as the air becomes evening cool, we savour the last drops of wine in our glasses and enjoy a few carefree moments of easy abandon. The piazza has an air of sober, discrete decorum and leaving it to whisper history we begin our drive back to Marsciano. We are not finished with the day yet. There is the porchetta and Rosso di Spello in the car for when we finally get home for dinner. The porchetta is delicious but the only saving grace for the wine is that it contains alcohol. I should have bought the best Merlot in Europe.