Just as I turn away from the Fontana del Nettuno and head towards Piazza Maggiore to join Sandra for coffee, I see a trio of musicians busking in the shade of the fountain. They are playing jazz and gathering a small crowd who are swaying, tapping or softly clapping to the music. There’s a jazz festival beginning on the weekend and this group is getting in some practice and giving an impromptu performance. One of the crowd steps forward and asks to join in on the drums instantly picking up on the trio’s improvisation. The crowd are enjoying the music, the sun is warm, we are in a perfect public space and the musicians are having a great time. Syncopated rhythms bounce off the surrounding palazzi. A sublime moment.

After coffee we walk under a portico toward the Archiginnasio. These arcades which run along the street fronts of most buildings in Bologna are one of its most obvious features, giving the city scape a unifying aspect and each street a continuous visual rhythm. Like the jazz trio in the piazza, their beat is syncopated, inventive and continuously variable. There is a basic form however it has endless, individual, creative touches added by builders through the years. Sometimes the arches of a portico will be round, sometimes pointed. The materials for columns change from stone for this building, then brick for the next in the street. Some columns have elaborately carved capitals, others plain. In Via Marsala there is a perfect illustration of the origin of porticoes. At one particular spot in the street stone columns are next to a very old portico supported by wooden columns and braces. The porticoes originated when some inventive owners decided to extend their upper stories over the street holding the extension up with wooden columns. This was illegal but in a very Italian way became accepted once the practicality of being able to walk around the city in comfort protected from rain and sun was recognised.

We walk under the cool portico heading from Piazza Maggiore toward the Archiginnasio. This building was constructed between 1562 and 1563 to house the scattered faculties of the university, founded in 1088 and the oldest in Europe. This is the learned part of Bologna – the learned, the fat, the red. The architect went by the nickname of La Terriblia, apparently a rather testy gent. As fascinating and grand as his work is and no matter how calming, the arcaded cloistered central courtyard is, we are not here to study his work, we are here to see the Anatomical Theatre. This is where the medical students were treated to the dissection of human bodies. This is one of the most incredible rooms I have ever seen. It is entirely constructed of fir wood. Built in the form of an amphitheatre, the tiered seating for the students rises away from the central, marble topped dissecting table. At one end is the elaborate professor’s seat, covered by baldiquin which is supported by two wooden figures carved by Ercole Lelli. These are the famous Gli Spellati, the skinned ones. I look with amazement at the slightly disconcerting work Lelli has given us. Two nude men, both with their skin completely pulled from their lean bodies revealing the structure beneath. Each bone is visible, each muscle and tendon is there for the viewer to examine. The skinned penis makes me wince and the skull with ears stripped of skin attached and eyes in their sockets is both fascinating and horrible in its life like accuracy. If I’d only come to Bologna to see this I would leave satisfied. Enough of the learned, let’s get back to the important things in life; let’s get back to the fat. The first dinner we had was neither authentic nor good. It was awful. Great setting, warm, barmy evening and we should have known better. It was called Pizza’s. Enough said. So we are walking the streets carefully reading menus, trying to get a feel for each restaurant, rejecting all those with pan Italian menus, appealing to undiscerning tourists and business people in town for exhibitions and conferences. We are now in Via Augusto Righi far enough away from Piazza Maggiore to deter most such people. Our feet are sore; we are tired and very hungry when we pass Trattoria Rosso. It doesn’t look much still we read the menu. All the greatest hits of la Cucina Bolognese. We cannot take another step so we slump at a table and order a bottle of Sangiovese di Romagna. As the wine does its work on our art and architecture saturated minds and our weary bodies relax in our chairs, things take on a brighter aspect. Another balmy night, another gentle warm breeze and the smell of cooking. I look around; I am the only non Italian here, promising. The food served to nearby tables looks edible, also promising. An American couple study the menu and the relaxed loudly conversing customers, look down their noses at them and leave, even more promising. We have found ourselves in a simple restaurant packed with locals. The test will be the food. We have Tortellini Romagnoli, with prosciutto and butter, Gramigna, a typical Bolognese pasta with a crumbled sausage sauce. The wine has disappeared so we order another bottle and life is taking on a very rosy glow. Our main is placed on the table. Stinco e patate arrosto, veal shank with roast potato and cotoletta alla Bolognese, veal, cream, Grana Padano and prosciutto with a side of fried zucchini with amazingly good batter. This is one of those times where the meal is greater than the sum of its parts. Satisfying, if not outstanding food, true to its origins, lively crowd, perfect weather, tired hungry diners and restorative wine. Full bellies, light heads and happy we return to our hotel room with its wonderful view of Garibaldi’s horse’s arse. It’s mid-afternoon and Sandra and I are sitting in Piazza Santo Stefano, once again resting weary feet. This magnificent piazza is a restful place to sit and take in the surroundings. Triangular in shape, it’s surrounded by porticoes palazzi on two sides and on the shortest side is the Santo Stefano church complex. Originally seven churches were on this site but rebuilding over the centuries has left just four. Opposite us is the Renaissance Palazzo Bolognini Amorini Salina built between 1514 and 1525 with its rhythmic, semicircular arched portico and brightly sun lit facade it has a calming influence. Across the top of the building is a row of terracotta busts set in niches, from this distance there seems to be only two different heads, a child and a man repeated across the facade. Of course we have to visit the church which was founded by San Petronio, a fifth century bishop and the patron saint of Bologna. I am interested in saints and the incredible miracles they are supposed to have performed. There is often a good yarn involving dragons or resurrection, miraculous cures, flaying, crucifixion or burning. Modern saints seem to restrict themselves to curing incurable diseases when they are dead. That’s a neat trick. So I research Petronio and find he is a rather disappointing Saint. I can’t find one miracle he has performed. It seems he was an administrative Saint, perhaps he balanced the church books, got some frescoes painted under budget or cajoled the stonemasons to finish a church ahead of schedule. All these things rank as miracles in the modern corporate world.

We want a plate of tortellini and we have come to Trattoria Serghei in Via Piella to get it. This trattoria makes no attempt at any form of contemporary design. The dark brown wood panelled walls are lined with shelves of bottles, vintage posters and photos. The ceiling panels are woven rattan. Very traditional and comforting. We read the menu and it is very traditional and comforting as well. A large group of boys out to dinner is sitting at a long table enthusiastically dining on steak. An old boy wearing a striped shirt and red braces is having dinner with a friend who looks like Ian McLellen. They have that professore, dottore look favoured by older Italian men. They are totally at ease, as though Serghei is their second home and perhaps it is. Nearby sits an English couple trying to make sense of the menu. We order an aperitivo to help us choose what else beside the tortellini in brodo we will have. So with a glass of Pinot Nero Dolomiti from Trento we commence. 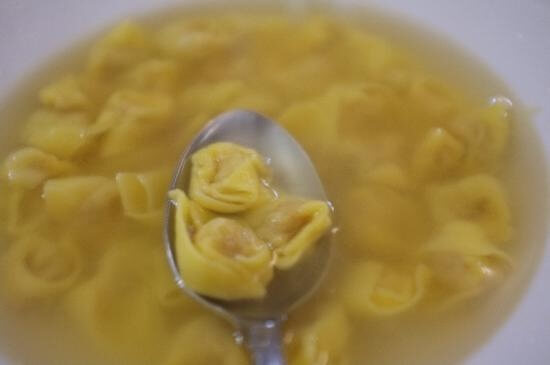 The tortellini has just the slightest hint of nutmeg and is in the most perfect chicken brodo the pasta is soft and delicate and we are happy diners. For her secondo Sandra has Zucchine ripiene e Polpettine di vitello because she connot resist meatballs and I have Osso Bucco di Vitello con Purée di Patate. The superbly tender meat melts in my mouth. Every Italian meal deserves good bread and the bread at Serghei is superb, soft and just perfect for mopping the last delicious dribble of sauce and the crust is shiny, firm and chewy. So we do as the Italians do “la scarpetta” and use the bread to transport the last drops of sauce to our mouths. I am satisfied but greedy so I have dessert; Pan di Spagna soaked in Alchemes liquore and served with ricotta, chocolate and almonds. It was good.

While we are still eating the boys’ night out leaves, but not without stopping at the tiny bar just inside the door for a quick grappa to fortify them for the trip home. The English have already left with the comment “This is not like the Italian restaurants back home.” We are so glad that it’s not.

There are two legends that explain the origins of the navel shaped, meat stuffed tortellini, and each involves Peeping Tom innkeepers. In the first version Lucrezia Borgia was staying the night in an inn. The innkeeper is so bedazzled by her beauty that he decided to take a peak though the keyhole of her door to catch her in her full glory but all he can see in the dim candle light is her navel. But this glimpse is enough to send him into ecstasy and so, inspired he rushes to the kitchen and creates a pasta imitation of the most beautiful navel he has ever seen. The next dirty old innkeeper does a similar thing except that the object of his sneaky keyhole peering is Venus. Lucrezia Borgia or Venus, you take your pick of navels. Luckily they didn’t see………….. Stop that, stop it right now!