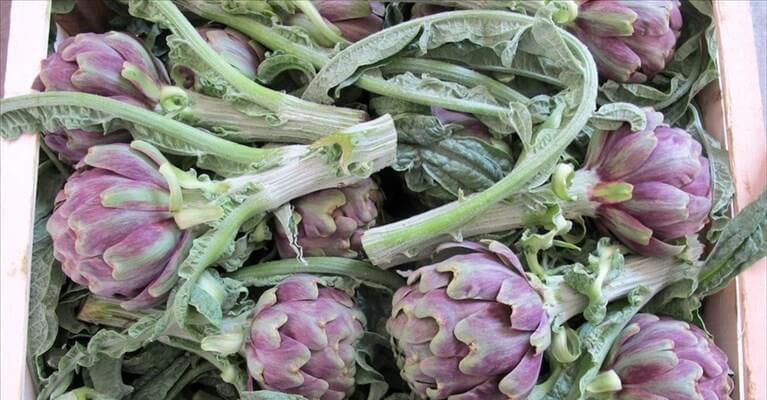 Spring in Italy this year was unseasonably cool with quite changeable weather. The weather in May was so unusual that the Month was christened Maggio Pazzo, Mad May.

On a cool damp April night in this crazy spring, what is the best thing to do: stay at home, pour a warming glass of local red wine and start to prepare a comforting mushroom risotto? Or drive through the drizzle for more than an hour to a small village called Cupello to help celebrate the artichoke? This noble member of the thistle family is a most delicious vegetable, and this particular example is the pride of the village. It is so adored that the people of  Cupello devote a four day festival to it; in fact, they have even worked out a way to drink it.

The artichoke cultivated in the countryside surrounding Cupello is called Mazzaferrata, so-named after a medieval weapon: a rather vicious looking club resembling a ball on a stick but made of iron. Hereby lies my initial hesitation about attending this event as it seems highly probable that any vegetable named after a weapon used to bash your enemies brains out would be far more dangerous than delicious. Secondly, and with all due deference to the 4500 Cupelliesi who live there, their village does not rank in the top bracket of beautiful villages in Italy. (I checked it out on Google Maps, so I know). Finally it’s cool and rather damp, that glass of red wine is beginning to sound like a rather excellent alternative and the idea of spending an entire evening eating many dishes based on the same ingredient is not overly enticing.

However, Sandra has been wanting to attend one of these village festivals for a long time.

Now her idea of a balanced diet is four different types of meat and, as a good Pescarese, as  many types of fish and seafood as possible. It’s not that she doesn’t like vegetables, it would be hard to be Italian if you didn’t, it is just that she is perfectly happy for me to eat her share of plants. The only exception to this is artichokes. She can’t walk past them in the market without buying some, preferably to have with lamb and so, reserving my judgment, I agree that we should go to the Cupello Festa del Carciofi. She says there will be lots of good food, wine, interesting stalls, music and perhaps some dancing. I go to find a warm jacket and a scarf.

Paola drives. (I’m banned just because I once knocked a side-mirror off a Fiat Panda). Simone looks hungry – he eats everything, even things like squid eggs. Sandra looks expectant while I look out the  car window at the damp evening. We drive though the drizzling rain for more than an hour and stop in an almost deserted, windswept car park. Not a promising start.

We walk into the village. There in front of us, facing Piazza Giuseppe Garibaldi, is the Chiesa della Nativita di Maria: it’s stark white facade a product of restoration following bombing during World War Two. The church and the piazza are illuminated for the occasion. There are a few people wandering around and a couple of Carabinieri patrolling with surly expressions. Behind us there is a stage so perhaps there will be music later. We pass a couple of contadini (farmers) with a few crates of artichokes and fava beans for sale and as we stroll down Corso G Mazzini, I spot a stall selling artichoke burgers. Should I have one? Not just yet, I can come back if nothing else appeals to me. As we turn a corner, things are beginning to look up. Birra Artiginale? Good. Wine? Better. Artichoke liqueur? Interesting.

Just past the elegant seventeenth century Palazzo Marchione we are directed down a lane towards the entrance of a tent. There is a slow moving queue of a few contented locals in front of us. Apparently this is where the food happens. Nothing is happening in the queue, or as far as I can see, in the tent.

Then, within a few moments, almost without noticing, it seems that we have chosen our dinner ( a selection of four courses) from any one of the four different set menus, paid an extremely reasonable 18 Euros, shown to a trestle and promptly been awarded a glass of rosato for our efforts. I look around. What I thought was originally a mere tent, turns out to be a massive marquee erected over a large car park. A team of smiling and helpful, not to mention well-trained locals is expertly ushering people to their seats and dispatching bottles of Montepulciano d’Abruzzo to the trestles. The marquee is now filling fast. Families are organising children, greeting friends and making Nonno and Nonna comfortable like it was any other day.  Over in the kitchen is a team of chefs cooking and a bright-faced group of local women plating the food. It’s all rather calm and efficient. Each order is placed at the front, sent to the kitchen, cooked, plated, delivered to tables with barely a moments hesitation and, as far as I can see, no mistakes. I’ve never seen such impressive organisation and at this point, I’m beginning to think I may enjoy this night after all.

Our food begins to arrive and I am impressed by the quality. It’s not easy to keep up this quality and efficiency,  serving about  8000 over four nights. So a whole menu based on artichokes; too much? Each dish is delicious in it’s own way and there is enough variety of flavour and ingredients to sustain interest throughout the meal. I have included a description of my four courses below:

I had never had any of these dishes previously, so each was a delightful discovery. Some were traditional Cupelliese, such as my Secondo course, and others were very good examples of the modern Italian way of putting seasonal  ingredients together in unexpected ways, such as my antipasti.

When we have finished our meals, happy, satisfied and full of warming Montepulciano d’Abruzzo we join the crowd outside. A new arrival has set up opposite the artisan beer stall: a Kombi van cocktail bar. Signor Kombi is having more fun than the customers, darting about under the popped roof of his van. He is a great multitasker: making jokes, smoking, mixing cocktails and flirting with the ladies all at once. Following an increasingly familiar tune, we walk back through the now humming piazza. Just as Sandra said: there is music, but this is no ordinary band. Here, in little Cupello, right in front of us is Zucchero, one of the most famous Italian singers of all time performing his greatest hits. This is no tribute band.I’m certain it’s the real Zucchero. It is in this moment that I realise I am having a great night after all.

This kind of event celebrating a local specialty is called a sagra and are held all over Italy, often during summer, and it is here that you see the real Italy. Italians being Italians: expressing pride in their village and its traditions, local products and food. The format of a typical sagra is very similar to the Cupello’s Festa del Carciofi with local food highlighting a product the village is famous for, stalls following this theme and a musical event in the main piazza. If you ever have the chance to attend a sagra when you are in Italy don’t let the opportunity slip by. There you will learn more about Italy and the Italians than you ever will sitting on the Spanish Steps in Rome, or staring at the copy of Michelangelo’s David in Florence.

Because I can’t better this background to the event, here’s what Anna from Abruzzo with Gusto says about it on her blog:

“At the end of March, market stalls in the Chieti province start selling a local variety of a delicious artichoke called Mazzaferrata or carciofo di Cupello. Locals say it is beautiful like a flower and sweet like a dessert. This particular variety is green-purple, without sharp thorns and has generous fleshy hearts.Wild artichokes growing in the area around Vasto were mentioned in a travel diary of a Dominican friar visiting Abruzzo in 1575, so most likely they were already used in local dishes back then. A later document exists dated back to the 18th century that confirms that artichoke of Cupello was cultivated by many local families and sold at the market in Lanciano . However, its cultivation on a commercial scale started only in the 1950s.Today, the growers in the area of Cupello, Furci, San Salvo and Vasto sell three million artichokes, fresh, turned into pate or artichoke hearts in oil. Since 1965, in April, the village of Cupello celebrates the harvest with a festival “Sagra del Carciofo di Cupello” attended by thousands of people. The last festival, in 2018, was a record with 8000 people turning up to celebrate the humble thistle and eat over 12,000 artichokes.” abruzzowithgusto.com