It’s three pm, Sandra and her sister Antonella have gone shopping and I’m at a loose end in Rome so I walk from the apartment where we are staying in Via Arco della Pace toward Via dei Coronari in search of a bar with outdoor tables where I can while away a couple of hours. I turn left into the narrow street where shafts of sunlight slice through the shade. I pass antique dealers, furniture restorers’ workshops and walk into Piazzetta San Simeone, named after the Church of San Simeone of which only the facade remains. In front of me outside Il Ritrovo Del Gusto is a table in the shade just waiting to be occupied so I sit there, and as it’s hot and I’m thirsty, I order a refreshing beer. Taking a sip I look around. To my left is Palazzo Lancellotti with its ordered facade, iron grilled street level windows, dull yellow render, and shrine to Christ the Redeemer surrounded by rays of light and supporting angels on the corner of Via dei Coronari. In the centre of the piazzetta is a fountain designed by Giacomo Della Porta which was originally situated near the Teatro Marcello. Its travels across the city are a legacy of Mussolini’s renovations of Rome. Behind the fountain is an osteria that is just beginning to get organised for the evening. I sit with my beer and watch. There is a continual passing parade of people, locals, tourists, a pair of very effeminate priests mincing along, kids returning from school, all of who can walk unimpeded as Coronari is traffic free at this time of day. In the midst of this there is an anarchic bike rider intent on causing chaos. He’s winding his way through the crowd, barely maintaining his balance as the cobblestones continually buck him off course. He’s riding one handed, talking on his mobile, wobbling with sideways crablike progress, oblivious to the people trying to predict his next move so he doesn’t mow them down. On he teeters with a casual, relaxed air, casual dress, casually tousled hair and a casual disregard for anyone else. Now even though the street is closed to traffic a spiky haired blonde is driving the biggest, blackest BMW through the crush. The cyclist with a sudden realisation that there is a world around him wildly gestures toward the street closed to traffic sign but she has as much care for others as he does, gives him the finger and continues to push through forcing the pedestrians against walls.

Strolling toward me with studied ease is a conservatively dressed man in his seventies, his grey hair carefully brushed back in mature Italian man style. He’s not hurrying, not dawdling but striding with measured pace. Over a pale blue shirt he is wearing a navy double breasted jacket with six buttons, grey trousers and brown shoes. This is all fairly standard for a dapper seventy year old, but what sets him subtly apart is his slim fitted jacket and shirt and slim cut trousers. Understated elegance with the trendiest cut. Not so demure was the man of about the same age I saw in Piazza del Popolo earlier in the day. He was sitting on the terrace at Bar Caffe Canova with his coffee and paper taking on the phone with a heavy smoker’s husky voice. From the ground up he was wearing, red shoes, red and white hooped socks, white trousers and a red shirt. Meticulously tucked into his collar was a cream and blue cravat, possibly chosen because a blue and gold cravat would just be a little too much. He has thick grey hair very carefully brushed back so there is just a lick of a curl at his collar, his skin is bronzed perfectly and his large square sunglasses add the finishing touch. I’m guessing getting ready to go out each day is a lengthy, thoroughly considered routine.

This search for individual expression in dress can easily provide the people watcher with a bit of light relief. Back in the piazzetta a short unprepossessing man wearing a black suit that looks as though it has been on innumerable afternoon strolls. His slightly yellowed open necked white shirt is desperately in need of a long soak in Omo and his shoes are disreputably scuffed. He sashays across the piazzetta and does a lap of the fountain. He’s not noteworthy at all but he knows how to rectify the situation. An oversized white silk scarf is carefully draped over his shoulder distracting from his otherwise rundown look. Flicking, waving and tossing the scarf in a bizarre dance he takes this one man show across the square and disappears down a side street.

Later he returns for a second passeggiata. This time things are looking up. He recognises a group of friends and glides toward them with the scarf accompanying him like a white billowing cloud. They move toward the fountain where he stands one foot placed on one of the stone bollards surrounding the trickling fountain and chats with the group. The scarf never rests: flip, wave, twirl, float. I am watching an animate surf ballet. The scarf rolls like a breaker, washes the shore of his shoulder, ebbs like ivory sea foam, now it’s a tempestuous white capped storm wave that rolls and slowly becomes calm but never ceases to be alive. Without waiting for applause the silk ocean ballet dancer waves the scarf to his companions and exits. This is not the only show the Romans are staging: not only do we have ballet and a fashion show but now a drama of unrequited love. A short way up Via Dei Coronari towards Piazza Navona is a furniture restorers’ workshop. This is street of antique dealers. A handsome man in his forties is leaning against the doorway talking to his older friend. Left arm across stomach, right elbow to left hand. His right hand caresses cheek and chin when he is not using it to make a point, dismiss or include, show doubt or emphatically emphasise. The street is congested with after work foot traffic. They are both critically observing the Romans walking home from work judging each one. That’s not quite true -there are two connoisseurs of girl watching and there is a lot to see. They walk the two steps from the shop doorway into Bar del Presidente, perhaps for a coffee, an aperitivo or to chat. Soon they return to the serious task of evaluating every girl who traverses their ten metres of Via Dei Coronari. To get a different view of the world they cross the street and prop themselves against a wall, and continue to assess every passing girl. Prancing towards them is a woman in her early thirties, dressed for the office and attractive. Bello looks her up, looks her down and likes what he sees. My table is too far away for me to hear what he says to her but I’m guessing is meant to be complimentary. She shoots him a haughty, dismissive glare, turns back to her path with a shake of her head and struts away, head high, shoulders back, chest trust forward, hips swinging. For the moment Bello looks devastated. His hopes for true romance are shattered. But he recovers quickly from his state of unrequited love. Another pretty girl is coming down Via Dei Coronari walking like a model on a catwalk. Bello is impressed. He looks her up, he looks her down………. 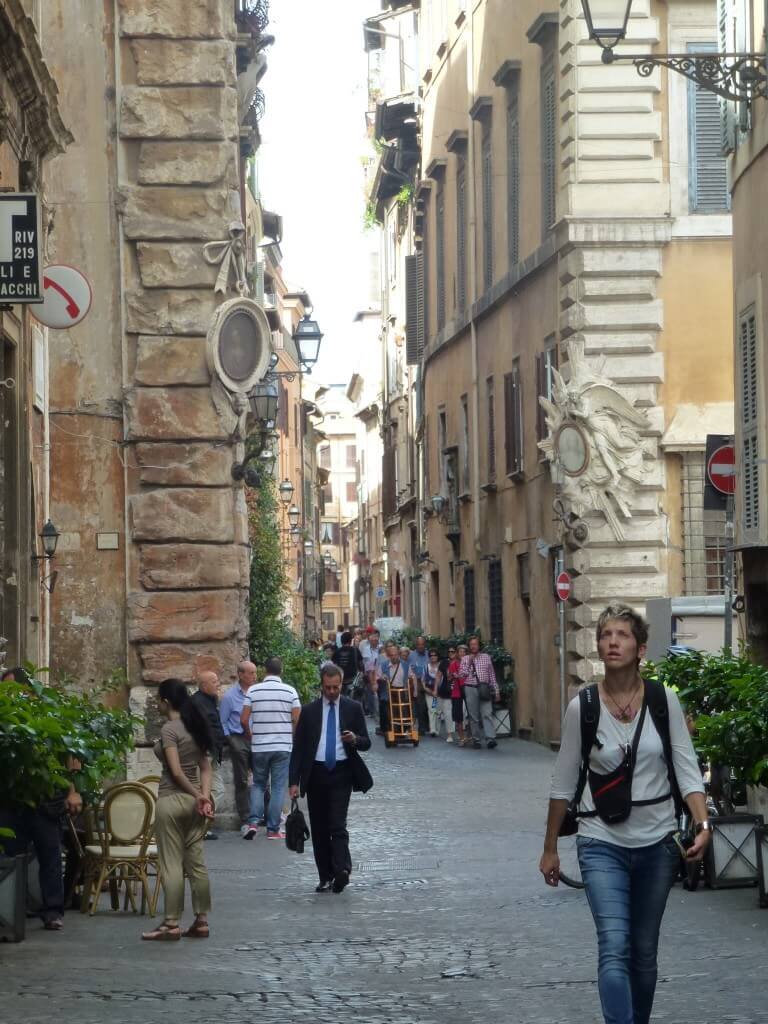 “Un’ altro signore.” The waiter brings me another beer as the Piazzetta San Simeone Festival Delle Arti continues. A busking cellist unpacks his instrument, and using the base of the fountain as his stage begin to play a set of classical music, providing a sweet, melodic background to the activity in the street and square. Now it is late afternoon and dog owners are beginning to arrive with their mostly small and fluffy pets. We have a dog passeggiata. The owners are criss-crossing the piazzetta at a slow, relaxed pace. Some music lovers toss a few spare coins into the busker’s cello case. There is not one determined power dog walker striding purposefully, brushing slower paced pedestrians aside. Dog owners greet dog owners with an embrace or kiss, dogs sniff dogs, owners check owners and their dogs, and dogs check dogs as well as people as they wander around an a somnambulant pace. The dogs are as completely relaxed as their owners.

A young kid on a bike is cruising around, navigating his way between dogs and humans. The cellist sees him and changes musical style. High culture is replaced by the Pink Panther theme. The kid rides over to him and shows he is musical too. He joins in his bike horn squeezing the bulb in time with the cello. Toot a toot, a toot a toot! The two musicians grin in recognition of each other’s mastery of their chosen instruments. The kid rides off and the cellist returns to the classics. A delivery van arrives, trucks are allowed access when the street is closed. The Diesel engine is clattering as the driver leaps out. The tailgate is crashed down and the driver slams crates of beer onto a trolley which he then thunders across the square to a bar. The bottles are clattering inside the crates providing a noise element jazz counterpoint to the classical music of the cellist who plays on serenely despite the din. It’s a nice metaphor for the way Italians just get on with their own lives in spite of embarrassing and corrupt politicians, cronyism, inadequate schools, annoying bureaucrats, an inefficient legal system, inappropriate development, lack of maintenance to their streets and all the rest of the background din of Italian life.

All the while Osteria dell’Antiquario on the opposite side of the piazzetta to where I am sitting has been preparing for the evening trade. Waiters are hauling out tables and chairs and arranging them under the white umbrellas on the terrace. They bring out a few at a time then disappear back inside. It seems that the is no urgency to get the job finished. When the tables are all out they unhurriedly begin to set them. This is a carefully considered task requiring great skill and artistry. After billowing table clothes are spread out and the serious job of arranging cutlery and glassware commences. I’ve set enough tables to know that this can be done quite quickly but this crew are in no rush at all. Each piece of cutlery is put in place with great deliberation, set a place stand back and admire it, slowly shuffle sideways to the next place, set it and so on around the table. Finish the table, step back to admire your work, head tilted slightly to one side. Oh no, a fork is slightly crooked. Creep up to it, reach out and adjust it. Step back and take a minute to admire the perfection of your craft. You are the Michelangelo of table setting. Polishing and positioning the glasses just so on the table is not such a high order task and offers a chance to enjoy the busker’s performance, nod to acquaintances, talk to dogs, and appreciate the gender of your choice. Of course this simple job is done with a grand flourish that gives the impression that it is far more difficult than it looks.

Via Dei Coronari runs from the top of Piazza Navona toward the bridge that crosses the Tiber to the Vatican so throughout the afternoon and early evening there was another entertaining group that was not as laid back as the locals kept me amused. I turisti. They will feature in my next post. 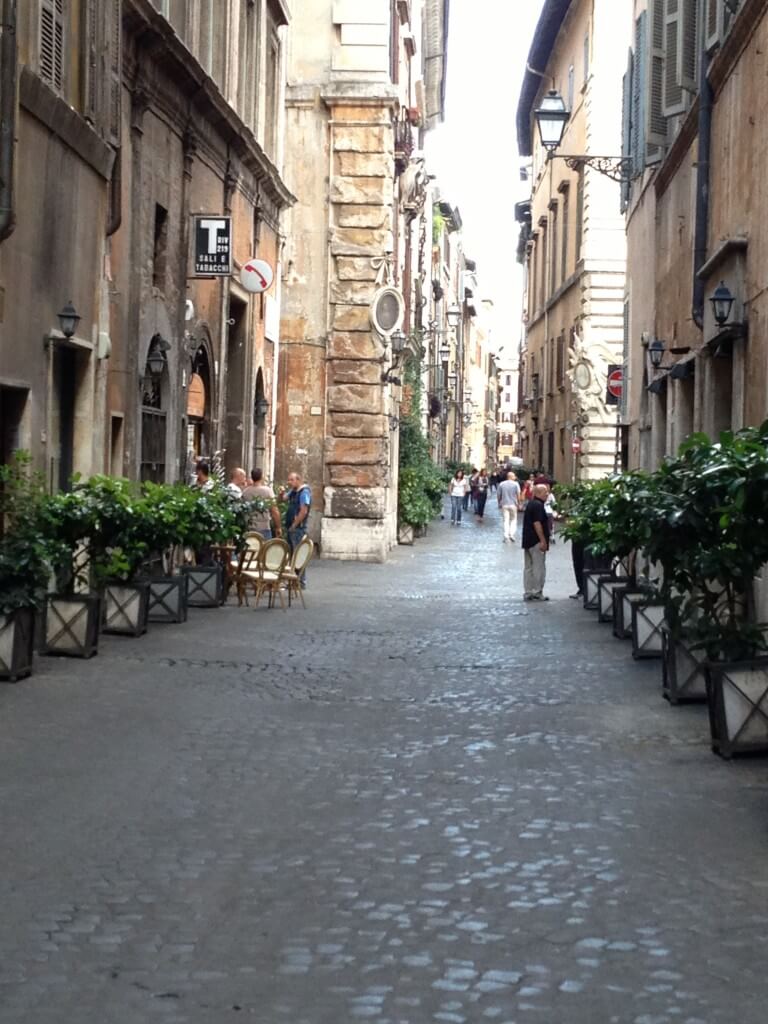