Alf in Italy – Strolling around Bologna 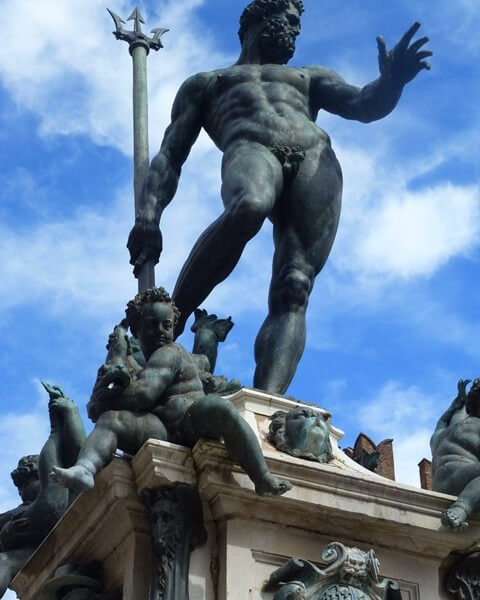 Walking around Bologna there are many wonders that capture the attention of the visitor. Some because they are impressive in size or historically significant or a great artistic achievement and some because the observant traveller momentarily glances in just the right direction and glimpses something intriguing or witnesses quirky examples of human behaviour. Here I have gathered a selection of observations while strolling around the city. Things I saw that swing from major to minor, from the astonishing to the mundane but which together added to my enjoyment and appreciation of Bologna. Here are a few of the things that amused and enlightened me. Walking along a back street Sandra draws my attention to a street sign. The street has a puzzling name, Via Malcontenti, the street of the miserable and unhappy. Why is it called this? Are the people who live here mean and pessimistic? If we walk along this street will our moods change? Happy in one street, turn the corner and become depressed. Perhaps we are in the bipolar centre of Bologna. There are two explanations of why this short, narrow street has this peculiar name. Once much longer, Via Malcontenti was truncated during the nineteenth century construction of Via Independenza which is now a major thoroughfare. During the Middle Ages Via Malcontenti was the route used by condemned prisoners on their way to Piazza Mercato, now Piazza 8 Agosto, where they were to be executed. I can’t imagine any of them being upbeat at that prospect. That’s the popular, colourful version of the story with the interesting elements of crime, punishment, death and perhaps regret. Historians, that group of academics who believe in spoiling good stories with the truth, have their own researched version of the naming of Via Malcontenti and it’s mundane and banal in the extreme. It’s called Malcontenti because the Malcontenti family lived there. Where’s the drama in that? They have left an important question unanswered. Why was the family called Malcontenti? Who was so unhappy, sad and living in a swirl of discontent that his descendants became known as Malcontenti?

Roast beef
We are in Via degli Orefici, it’s early evening, the weather is pleasantly warm, we are enjoying our aperitivi, a glass of wine, a beer and some ordinary crisps while discussing the day, planning tomorrow and looking forward to dinner. This street leads from the magnificent and much visited Piazza Maggiore so we are sitting at a pavement table surrounded by other visitors. A malcontent English couple sits at the adjacent table. She is wearing a floral sack and a huge sun hat even though it’s 7pm. She studies the menu and calls the waitress across. She is in charge of communication and is a firm believer in the loud and slow method of talking to people who have not had the good fortune to be English.
“DO – YOU – SPEAK – ENGLISH?”
“Si signora, ‘ow can I ‘elp?” The waitress has perfectly serviceable English.
“IT’S – ABOUT – THE – MENU. WHAT – IS – THE – ROAST – BEEF? HOW – IS – IT – DONE?”
I glance over to the menu board which reads-
Vitello Arrosto con Patate, then in English, Roast Beef with Potatoes. This seems clear enough . Should I help her out? THE – ROAST – BEEF – IS – BEEF – ROASTED – POSSIBLY – IN – AN – OVEN.” Sensibly I keep my mouth shut.
“In Italy it is different it is roast veal with potatoes.” This explanation is met with a very suspicious look. Surely it can’t be as straight forward as this? Surely these tricky Italians are trying to put one over me? Why would she say veal if the menu says beef? Putting suspicion to the side she orders it, has second thoughts, cancels the order and leaves. Has she gone on a search for understandable English food? A nice Vindaloo perhaps.

Buying shoes
Recently I read that the Bolognese are charming, well-mannered and very welcoming to visitors. This, it was claimed applied especially to the staff in shops and restaurants. This is true but I found the only shopkeeper in the city that this did not apply to. We were window shopping in Via Independenza and sauntered by a shoe store where the staff were remerchandising the windows. Half the shop was disorderly filled with opened boxes of shoes scattered at random across the floor. Two women were doing their best to create a beautiful, customer enticing display from this chaos. Sandra pointed to a remainder of the previous display, an elegant pair of boots for summer, sky blue denim uppers and leather soles. Heavily discounted. If they fitted they would be mine. Because I am incapable of saying anything like “Queste scarpe blu in vetrina….” Sandra negotiates for me. The shoe salesman is supervising the construction of the window display. “Scusi signora.” “How can I help you?” “Queste scarpe blu…..” He sighs, his shoulders slump and he seems to be thinking, “I’m busy doing a new display, the shop is in a mess and all these cheap tourists want is the discounted pair of last season’s shoes “. Instead he says “that is the only pair signora”. What size are you looking for? “Quaranta tre, 43.” He thinks “Not only do they want cheap shoes they are willing to take a chance on the last pair I have”. With great reluctance he fetches the shoes from the window. “Here”, he scowls “they are 43.” Of course they fit perfectly. Grumpily he packs them. Not content with disturbing his work because we wanted to buy shoes in a shoe shop, we have bought a pair of last season’s shoes and are too mean to pay full price, we wanted the only discounted pair in his shop. How dare these cheapskates without taste offer me money for the last pair of last season’s leftovers? Incredible!

Coffee for Germans
Here’s a scene I recorded in my notebook. It is idiosyncratically Italian, just a fleeting incident that amused me.
We are having breakfast in our hotel and I leave the table to get coffee. I can only see the standard hotel tea and coffee station complete with that breakfast horror the huge vat of continually warmed, insipid, brown liquid masquerading as coffee. We are saved we see an espresso machine behind the bar. Relieved that the Italians have standards when it comes to coffee I order an espresso and a cappuccino. While I am waiting a woman approaches the bar and asks where she can find the coffee.
“Which country are you from, signora?”
“I’m from Germany.”
“Oh, you are from Germany. This coffee here, “He points to the offensive vat of lukewarm, brown sludge.” This is the coffee for you. This is the coffee for Germans. Only in Italy!

A Tramp and “bella figura” The day is warm and we have been walking all morning. We need to find somewhere shady to sit and rest and there, across Via Luigi Carlo Farini is Piazza Cavour, named after Camillo Benso, Conte di Cavour, the shrewd Piedmontese politician who was one of the major creators of the unified Italian state. There’s lawn, a pond with a moss covered fountain and tall shady trees. The perfect spot to sit and rest. We find a seat in the shade and take in the very pleasant surroundings. Sitting on the grass under a tree is a homeless man who has all his meagre possessions packed into two suitcases. He is muttering to himself while rearranging the contents of one case slowly, precisely and with great care. Then I notice that he is not the usual scruffy, stained and torn clothes wearing tramp. He has made himself as well presented as he can. He is wearing a clean blue suit and complimentary blue suede shoes. He is now dusting off his suit jacket and wiping the dirt from his shoes. He may only be a tramp but he is the best presented tramp in Bologna. Unconsciously he is demonstrating that quintessential Italian character trait, “la bella figura” the art of always being aware of making a good impression. “Bella figura” is not just cutting a fine figure, dressing well and taking pride in your appearance it is knowing how to behave with grace and composure in social situations and extends to anything that is necessary to create a favourable impression for the whole world to see just as this tramp is doing.
As we sit on our park bench enjoying a short rest on our trek around Bologna I notice a couple in the full flush of youth and love. She is pretty and well dressed. So his he. They are locked in a passionate embrace, waves of lust are flooding the park but something is troubling the young man and it’s playing havoc with his sense of “bella figura”. As they embrace and kiss without regard to strollers in the park he is crossing his legs and pulling his jumper down with his free hand, the one he is not trying to get inside her shirt. Things have gone too far to hide what is happening in his jeans which now contain a huge bulge. He continues with the leg crossing, jumper arranging routine but to no avail. The Asinelli tower now has a modern rival. At last they stop to draw breath. She looks down and sees the true measure of his feelings for her. She knows how to deal with his embarrassment with poise, aplomb complete composure she can maintain a sense of “bella figura” in any situation. With a slight grin she reaches down and gently gives it a tender pat.

Of course there are far more edifying sites in Bologna than lust filled couples being over demonstrative in full public view! Walking across Via Francesco Rizzoli you step into Piazza di Nettuno. This is an astonishing public space surrounded by many superb medieval civic buildings. To the left is Palazzo Re Enzo and to the right is Palazzo D’Accursio. Walking directly on, you will be in Piazza Maggiore. In the centre of the piazza is the incredible fountain, a masterpiece of Mannerist sculpture, built in 1565 to honour the Bolognese Pope, Pio IV. The fountain is by the Flemish sculptor Jean de Boulogne who was adopted by the Bolognese as their own and called Giambologna. At the top of the fountain is a lean, taut and muscular bronze statue of Neptune, Nettuno in Italian. He is completely naked, exudes power, his trident is in his left hand and his right hand is stretched out in a gesture to calm the sea. At the base of the fountain between voluptuous, almost free form basins are mermaids proudly holding their ample breasts, spraying streams of water from their nipples. This spectacular display of nudity may have pleased the earthy citizens of Bologna but it displeased the Church authorities who would have preferred something more decorous and modest. In the beginning Giambologna had designed his Nettuno with a larger male appendage, but the Church insisted that it be reduced by a few centimetres. The cunning sculptor had the final say in the matter. If the viewer stands in a certain spot the thumb of the left hand lines up with Nettuno’s groin giving the appearance of being in the same aroused state as the young man in Piazza Cavour.

All in all an incredible day in Bologna.