Alf in Italy – The Eremo of San Bartolomeo in Legio Our friend Sandro is a mountain guide. He is taking me to visit a saint’s hermitage in the foothills of Maiella, the montagna madre of Abruzzo, where you are never far from wild, remote and often mysterious places. This is one of the ways Abruzzo differs from the more visited regions of Italy. The largest and oldest national parks in the country are here. Major peaks of the Apennines, Gran Sasso and Maiella can be seen from almost every place in the region and completely dominate the landscape. Depending on the season and the light they are by turns grey weathered limestone monoliths, snow draped and glowing in winter, or early spring sunlight or pink tinged reflecting dawn or dusk light. I don’t know where I’m going or what to expect from this outing, perhaps just a pleasant stroll in the countryside. As it turns out it is far more than that. We wind our way up from the Pescara valley through hilly farming countryside to Roccamorice, a tiny medieval village set on a spur overlooking the valley. Then across the plateau toward the mountains that loom ahead. The road narrows and we turn down a dirt track by a sign directing us to the Eremo di San Bartolomeo in Legio. Sandro parks his well-worn Fiat and we head out along a rough path, alone with only the sound of a few chirping birds and occasionally the almost imperceptible rustle of leaves. The well-trodden track passes through low oak scrub. It’s a warm August day and I am grateful for the dappled shade that protects my pale, delicate Anglo Saxon skin. Blackberries and broom border the track, and as we pass an open meadow we wander through waist high ferns. We stop momentarily and let the sun warm us and the breeze soothe us. The ferns sway. It is as though we are floating, becalmed in a verdant, living sea. It’s hard to believe that the out-of-sight rushing, hectic modern world is close by. 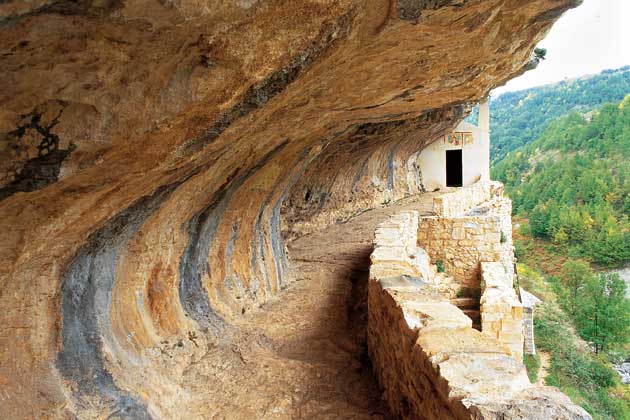 Like the a stereotypical pilgrim I’ve unconsciously chosen to wear sandals and as we stroll along the descending path small pebbles worm their way between the sole and my city soft bare feet, giving sharp pricks. Perhaps this discomfort was a minor part of a pilgrim’s penance. We stop by a wrought iron cross and I shake the stones free. We are now walking along the wall of a steep valley, the vallone di Santo Spirito that a stream has cut into the plateau. As we go deeper into the gorge Sandro tells me stories of the Eremo. Dedicated to San Bartolomeo it was built by Pietro da Morronne during the thirteenth century replacing an earlier structure. Pietro da Morronne was the ascetic founder of the Celestine order, and later Pope who lived a holy simple life of mortification and penance always wearing a hair shirt and chains. As we get closer to the hermitage and the rim of the valley becomes the skyline, I understand why this site would appeal to a holy man seeking to live the simple contemplative life. It is embraced by the valley making an enclosed world. Any view of the wider world is cut off. A slight breeze is the only disturbance to the stillness and there is a hushed tranquility. When it comes to religion I like to express my attitude by misquoting and twisting the thoughts of the Roman philosopher Lucretius just to suit me. Is that permissible in this post truth age? If there are gods and I sincerely doubt there are, then they are too busy with their outward divine concerns to show the slightest concern for the petty actions and foibles of imperfect creatures like us. Of course as a good pagan Lucretius believed there were gods. But there was something about this place of pilgrimage that was pushing me from pragmatic suspicion towards a more credulous state. We are walking where countless people have walked for millennia before us; we are part of an endless procession of humanity that has been coming to this place since the Stone Age. Presently the path drops through a hole in the rock and the hermitage chapel is just ahead, built into a ledge in limestone cliff that curls over it like a wave frozen just as it is about to break. The simple chapel has a central doorway and above the remains of a fresco depicting a Madonna and Child and Christ pronouncing a benediction. Walking in we come face to face with a wooden statue of San Bartolomeo standing before us holding a knife in one hand, his skin draped over his shoulder. He was martyred by being crucified upside down and skinned alive which is why he is the patron saint of butchers. Sandro tells me that some pilgrims express a morbid solidarity with San Bartolomeo by slashing themselves with knives. The saint’s statue is carried in a procession to the church in Roccamorice on the 25th of August every year. One year a man so crippled that he could not walk was brought to the Eremo and put before the statue. Lifting it as high as he could he looked it firmly in the eye,  “I am going to try to carry you back to Roccamorice but you know that because I can’t walk we will both fall and you will shatter to splinters so you had better cure me.” Having no choice the saint cured him and he carried his statue in the procession all the way to the village.

Spring water with curative powers trickles through the rock wall into a stone trough, a ladle is provided so the water can be sipped. I suppose that it is because of this holy spring that this has always been a place of pilgrimage, perhaps since Paleolithic times, with later cultures and religions layering their own meanings over the site, appropriating it to their own beliefs so that today it has a Christian significance. On this day Sandro and I are just one link in a chain of uncountable visitors, some seeking solitude to reach religious enlightenment, some to continue village traditions, and others like ourselves to gain a short respite from every day care in a place of tranquility and great natural beauty. The sense of mystery here makes me begin to feel that it is possible to find a spiritual antidote to the mental turmoil that leads saintly hermits to don hair shirts and spend their days in prayer and contemplation. There is a series of rough crudely hacked steps leading through the hole in the roof of the rock balcony back to the path. The more devout pilgrims would prostrate themselves and crawl up them. The idea of going through pain to help reach inner peace silences the siren call of mystery and faith. Safely back on the track I untie my mind from the mast of logic and reason and walk back through the luminous sunlight. Pietro da Marronne, Celestino V the Abruzzese Pope born in modern Molise, lived most of his life as a hermit in the mountains of Abruzzo. Crowned at L’Aquila he held the position for only five months (July -Dec 1294) before he became the first, and for centuries the only Pope to resign, supposedly because he was horrified by the worldliness and corruption of the church in Rome. Perhaps as a peasant hermit who did not have education to speak to his cardinals in Latin and who was happiest leading a solitary, contemplative life he realized that even though he was intensely pious he was not equipped for the rough and tumble of being a Medieval Pope.