Alf in Italy, Two tickets for Rome (Due biglietti per Roma) Sandra and I were about to return from Pescara to Rome. The train takes an indeterminable four hours to make the trip. The bus (we say coach for an intercity bus, the Italians call it a pullman) takes about two hours along the A 25 / A24 autostrada through the spectacular scenery of the Appenines. This route which goes from coast to coast, from the Tyrrenian Sea to the Adriatic, linking Rome with Pescara is one of my favourite in Italy and I will write more about it in a future post. Being a sensible couple we decide to travel by “pullman”. Being a practical couple we will get our tickets the day before we go.

The bus terminal is in front of Pescara Centrale Railway Station and so is the city’s main car park. We park the car dodging the same potholes that were there on our first visit. With true Italian care for maintenance they have been there for twenty years and are candidates for World Heritage Listing. There is a small ticket office selling tickets for both local and long distance buses. If you are familiar with me you know that my Italian is only suitable in emergency situations like ordering coffee or organising a beer, so Sandra provides a running commentary on ticket buying, helpfully translating what other bus travellers are saying. 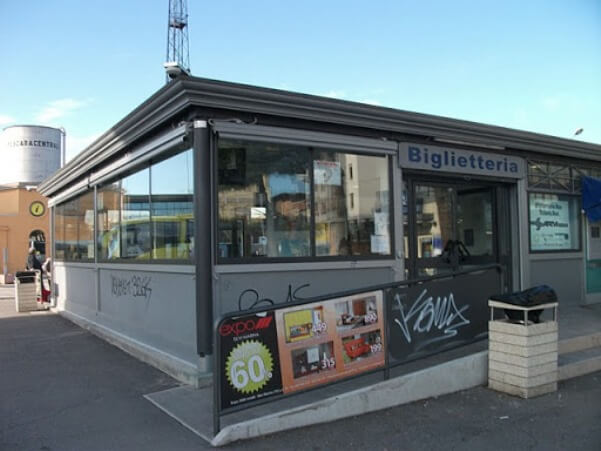 The office is overflowing with Pescarese trying to purchase bus tickets. Now I may not know much Italian but I do know that “Buongiorno. Due biglietti per Roma, per favore.” will  do the job. This is so simple I could do it on my own without any more Italian. A few minutes and I’d be done. But this is Italy. Things are different. The simple is not simple.

There are two doors to the ticket office. One is labelled entry and as any Australian would expect the other is the exit but the crowd is going in through the exit. This is confusing to an Anglo Saxon. In means in, out means out but no one here takes the slightest notice of that. When in Pescara do as the Pescarese do. So we join the people entering through the exit.Two doors, two queues? And queue is not the right word. This is a concept that’s part of my DNA but only vaguely comprehended by Italians. It’s a semi ordered, slow moving, fluid phalanx of people of all ages and sizes with what appears to be varying degrees of mental stability. Faces have expressions of resignation  or impatience. There is a mood of resigned frustration, a sense that even with this simple transaction something will go wrong, that there is no hope of simply waiting your turn and leaving promptly with a bus ticket. This is more a melee than a line. People nervously move from side to side, hop from foot to another, twitch and fidget nervously. Some saunter from one line to the other while others keep their gaze fixed on the head of the queue. Perhaps there will be an acquaintance ahead who will let them gain a few places. The groups slowly meander forward. Looking inside I see there are three windows open for business and two signs. One announces Assistance the other Inquiries. What’s the difference? I’m with an Italian; she knows the ropes so I’ll just tag along.

Sandra warned me that there would be people who try to jump the line. “Stand your ground and don’t let them push in.” A man wearing a baseball cap and aviator sunglasses casually walks past those who arrived after us and slips in behind us. He looks around assessing the situation, asks Sandra for a light, draws deeply on his cigarette and settles down to wait. He looks more relaxed than the others around us. It’s now ten minutes since we arrived, we haven’t moved and more would be bus travellers have joined the scrum. Behind us is a man who is becoming so agitated that his large, curled moustache is quivering. I look ahead. One ticket is sold and one person escapes. The pace quickens. Two tickets are dispensed in the next five minutes so we all shuffle forward not leaving a space for any opportunist to seize. Things are not happening quickly enough for Signor Moustache. He is muttering to himself while vigorously rubbing his hands together. ” If this doesn’t speed up I’ll kill myself, I’ll commit suicide.” 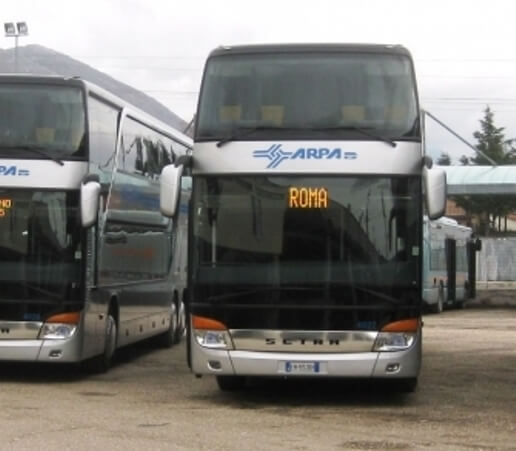 At last we are inside the building and there is a student attempting to renew her concession ticket.

“So you will have to buy a ticket then when this one has expired.”

“But I catch the eight o’clock bus so I don’t miss my first lecture. This office doesn’t open until nine and I don’t want to risk being fined for travelling without a ticket.”

The ticket seller slowly digests this unheard of set of circumstances and finally agrees to give out a new concession ticket. The student has to fill out a form which takes five minutes. Slowly the ticket seller checks it with the thoroughness of a lawyer reading a deed. Satisfied at last, she tries to print a ticket but the printer jams. Of course this stops all forward progress in this line and while the rest of us creep along towards one of the other windows at snails’ pace the more impatient try to wield their way into other groups.

Signor Moutache is reaching stratospheric levels of agitation. His shoulders slump and begins to shake as though he has Parkinson’s disease. Signor Baseball Cap has summed up the situation as hopeless, shrugs and quietly leaves. Another ticket is issued and everyone takes a half hearted shuffle forward. The printer is now working again so some dash back to that window and a few more tickets are sold. We have now been here for twenty minutes. Without warning, at exactly midday, one window is slammed shut and the woman wanders away. Perhaps it’s lunchtime? Just as the people in this unfortunate line begin to view everyone else’s  position optimistically another employee appears. It’s going to reopen. No, she ignores the crowd counts the cash and leaves. Two more tickets sold, one to Signor Baseball Cap who has cunningly wormed himself to the head of a line. He triumphantly leaves with his prize. It only took him half an hour.

Now the extremely jittery Signor Moustache has reached a deeper state of dejection, talking incoherently to himself and rocking back and forth on his heels. At least he has not killed himself in public. The computer is on a go slow and sales crawl. Someone asks for a timetable. They don’t have any. Why would you want to know when the bus leaves when you are buying a ticket? Now another employee with a cash box heads for the closed window. Will it reopen at last? Will things speed up? She very slowly and very deliberately counts the cash. Closes the lid and leaves. I count the staff enjoying a calm and relaxed atmosphere, free of any concern for bus travellers with suicidal tendencies. Why should they worry? They can buy bus tickets any time thy like. There are five. “Cazzo!” Five people, but only two out of three windows are open. Tickets continue to be doled out at a very casual rate.  At last after waiting for forty minutes we are one space from the window. Perhaps we will get two tickets for the first bus for Rome tomorrow and we will be able to resume our normal lives.

Now a very short and chunky woman wearing enormous oversized sunglasses that almost entirely hide her face sidles up to us. Where did she come from? She wasn’t behind us last time I looked behind. She looks at us as though we have no right to be almost at the very front. Slinking forward she tries to surreptitiously squeeze by to get to the front. “Are you ahead of me?”, she asks innocently. “Si!” We push to the window, edging her out so she can’t push in. Dejectedly she stands behind as Sandra steps up to the window. We have tickets. Bought, paid for, secured. We leave by the entry door, cross Corso Vittorio Emanuele II just beside the pedestrian crossing but not actually on it, walk up the pedestrianised Corso Umberto I, find a bar, sit at table on the terrace, let out a deep breath simultaneously and order. “Due negroni.” We needed them! 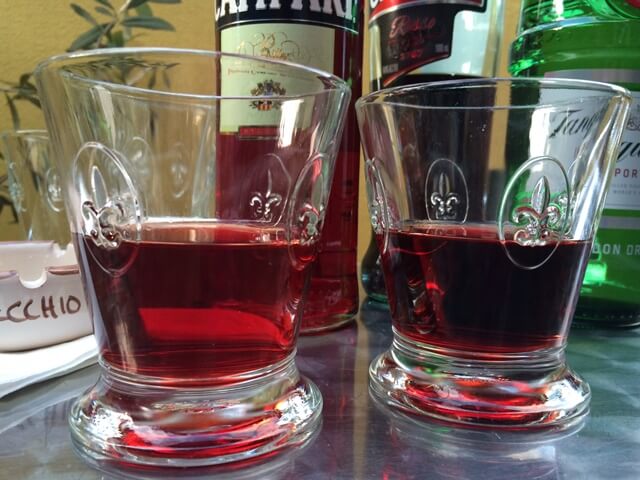