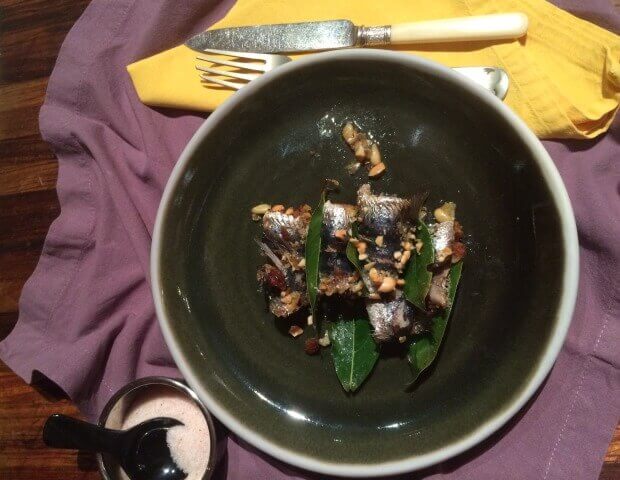 This is an extremely popular sardine dish in Sicily with variations to the cooking method and the stuffing. The dish is named in homage to the “beccafico” a small migratory and fig eating bird so the story goes. Becca means peck and fico, fig. The stuffed sardines resemble a beccafico bird. It is also said that when the birds still existed in Sicily they were stuffed in the same way as the sardines. On our last trip to Sicily I was lucky enough to eat a few of the versions of this dish. It is lovely served hot or cold either as an entrée or main course. This is my version which combines some of my favourite ingredients and ingredients used in restaurants in Palermo and Trapani.

If you’d like to learn Italian cooking, don’t forget you can book cooking classes in Melbourne with Sandra!

Beccafico ingredients for 4 people as a main course You will need an oiled ceramic or terra cotta baking dish to tightly fit  25 to 30 sardines rolled up.
Scale, gut, butterfly and clean the sardines, leaving the tail on. Buy whole sardines and filet them yourself, as the fileted ones available are too small and have the tail removed. When the sardines are closed around the stuffing, the tail is flicked upright to look like a bird. Wipe the sardines with paper towels before stuffing them.
Warm the oven to 180°.
Soak the sultanas in hot boiling water for 20 minutes, drain and dry in paper towels.
In a non-stick frypan sauté the finely chopped onion in two tbs of extra virgin olive oil, when the onion is soft add the breadcrumbs and toast them on low heat until light golden brown.
Add the drained sultanas, the pine nuts, the finely grated zest of the orange and lemon, salt, pepper and sugar. Remove from heat and allow to cool. When cooled add the Pecorino cheese and mix well. Add a little olive oil if the mixture is too dry.
Lay the sardine fillets on a working surface skin side down and place a spoonful of stuffing on each, fold the sardines over to resemble a fat bird, leave the tail sticking up. You may need to use a toothpick to keep each sardine together until you have enough to fill a row in your baking dish. Arrange the rolled sardines side by side in the oiled baking dish, with a bay leaf between each. 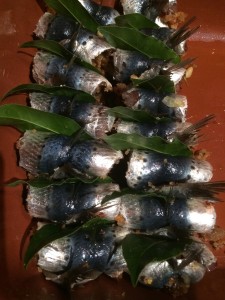 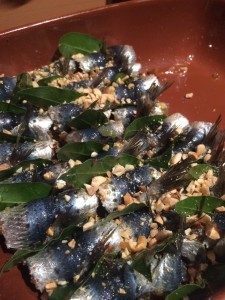 Sprinkle with the juice of the orange and the chopped almonds.
Bake in the oven for 15 to 20 minutes depending on the size of the sardines; make sure you don’t overcook them. Sprinkle with a drop of extra virgin olive oil before serving with a green salad.